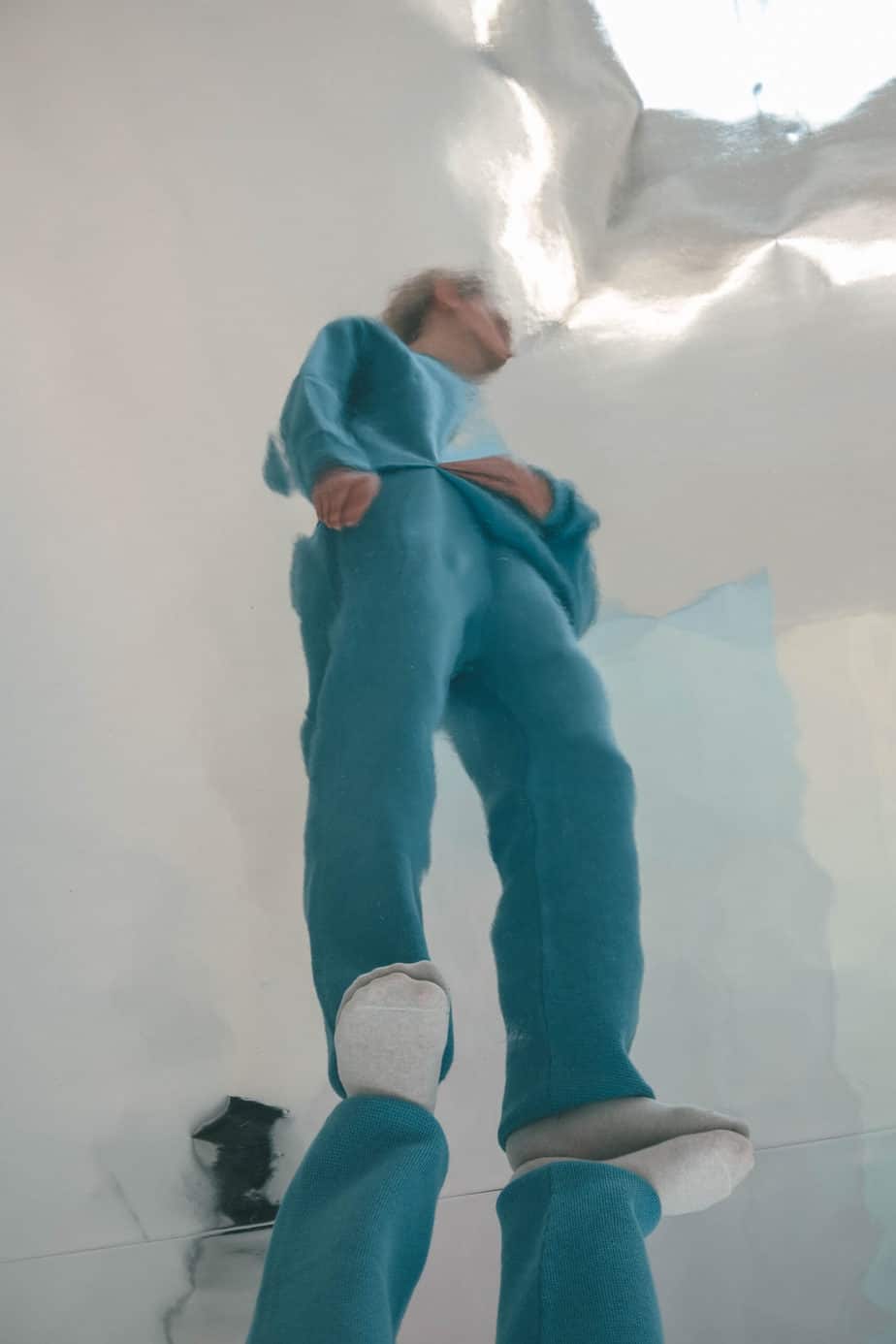 The guest walks down a grass path with a sponge cake in her hands.

On each side of the path are tall roses in full bloom.

The roses lean their purging animal heads towards the guest.

She passes by them, the heat of their bloom on her cheeks.

The roses softly trace the bare skin of her arms with their Eocenic thorns.

When the guest arrives at her neighbour’s door her arms are mapped with rivulets of running blood.

The cake she holds is soaked with living crimson and her eyes are the blue of a dream.

Is it right that the most impressive and hardest thing to do on stage is to be visible? When someone steps on a stage I immediately try and sus out their motivation, get to grips with the rules of their game, confront my expectations and kinaesthetically adjust to the performance language. I find that, initially, everything on stage communicates as a symbol and every action looks like it is being performed with the intention of generating a new element of the symbolic language that it is my job as a spectator to decipher. It looks as if when the performer does something it is because they want to direct me towards a layer of meaning to which it would be unartful to point at directly.It is very rarely the case that the performer will do something that I won’t interpret, in other words it is very rare that I accept their presence for what it is: them, there, now. In these two positions: presence on the one hand and representation on the other I feel confronted with a well rehearsed binary. After a performance I might lament how suffocatingly informative it was and by extension how emotionally manipulative it became. Alternatively I might complain that I had no idea what anything meant, that it all seemed so random and coded and I as the audience felt totally excluded from the event. It’s also familiar from the position of the creator; the claustrophobic feeling I get when I see that I am either creating a concept that amounts to an elaborate game of charades or alternatively being confessional in a way that is not of interest to anyone. These methods imply that I think making a performance is either about creating a puzzle that the audience has to solve or it’s a place for personal therapy where I get to express my deep feelings about something in front of a room full of strangers. In both cases there is a worthy intention; in the first case there is an acknowledgement that the audience is an active agent in the performance and should be engaged with as such, in the second there is an instinct to offer something to the audience that is original, truthful and unmediated. With the monuments of representation on the one hand and embodiment on the other we can end up feeling trapped into a narrowed vision that only lets us see the duality. Duality however is a trick of perception, and there are radical philosophies that offer another way of understanding which acknowledge difference but deny separation.

Deleuze is the philosopher whose project took up the baton of the monists Spinoza, Liebniz, Bergson et al by building an ontological picture of the world that was both Transcendental, based on a-priori, God given conditions and Empiricist, based on the measurable facts contingent to the moment. Two positions that had so far in the history of philosophy been in strict opposition. According to Deleuzian ontology transcendental nature and empirical culture do not sit in opposition but are seen as expressions of the same process.

Affect theory references this process when it talks of ‘the encounter of forces and the force of encounter’. It describes a reciprocal relationship between subjects and objects where both are seen as expressions of an emerging reality based on interactions that can be simultaneously understood through the geometric fundamentals of point, line and plane. For example, me writing this now presents a point of contact between the text being typed and the ideas in my mind; secondarily this point of contact happens in the context of a line of ongoingness that is composed of the larger field of relations at play, like the fact that that I am late with this text and that I am sitting in a new home and that I can hear the wind gusting outside; thirdly this encounter is happening on a plane of potential that includes the infinity of things that could happen, like a telephone ringing or a huge chunk of ice crashing through the roof. Moreover these possibilities exist in a realm of potential that is always actual. Considered from the perspective of point, line and plane our reality becomes simultaneously very concrete and very abstract. In this I hear an expression of what I often think of as the holy grail of performance, namely the moment when the performative action is very clear but the possible associations in the body-mind of the audience are multiple. From a performer’s perspective there is an experience of using yourself in an intimate way that is not governed by your intention but rather by the non-conscious experiences of intensity that use your body and the filters of your psychology to find its expression. It feels like an impersonal experience of the personal where one’s subjectivity is made available as an instrument for a song that is being composed in the moment. In my experience it comes with a feeling of emptiness, where the body becomes a vessel like structure for all manner of unplanned happenings to materialise and where I am as much an audience to myself as those who have purchased a ticket. What happens in the empty cavity of the form is not determined but is structured, structured in a way that is only revealed by its traces. Achieving this emptiness requires an epic act of unlearning as you put away all the tactics that were taught as ways to generate spectacularity and instead attempt (and always fail) to not control what is emerging. It can produce a sense of surprise as despite all the obscuring paraphernalia of the stage the person performing suddenly and almost accidentally becomes as visible as a naked flame.

Here is some practical advice from someone who (allegedly) reached their 7th body:

Draw the arrow of your breath through these four bodies till the fletching tickles your cheek.

If you can do all this, find a teacher who can introduce you to the next 3 bodies.